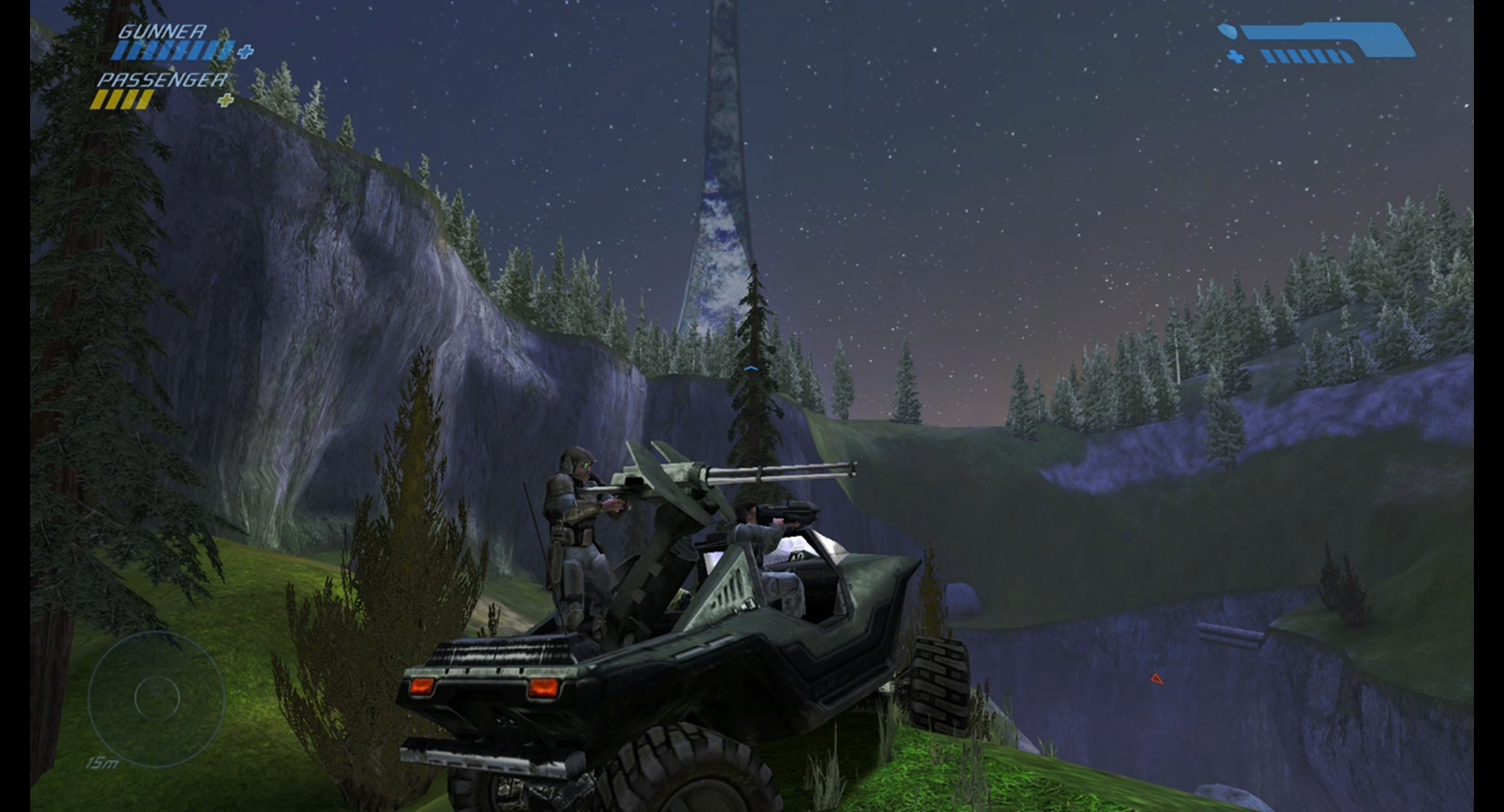 Halo: Combat Evolved is one of those games that really matters to me. When I was younger I wasn’t a PC gamer and, unfortunately, Half-Life passed me by. That meant that it was Bungie’s Halo, released on the OG Xbox in 2001, that introduced me to the world of the “modern” first-person shooter, and opened my eyes to the potential that video games had to offer worlds and experiences beyond our own. Back in 2001 – at the innocent age of 12 – it felt like Halo was providing a glimpse into the future of video games.

I remember first playing through Halo’s campaign at a friend’s house on his Xbox. We played split-screen co-op, stopping each time we made it to the point my friend had reached in his solo play-through. He was experiencing the story on his own first, and then replaying and sharing that experience with me. I didn’t mind having to wait, or that my friend had experienced the events unfolding on the TV screen in front of us; I was just amazed by what Halo had to offer; the large sprawling levels, the variety of weapons, the vehicular combat, the colour palette, and more!

It didn’t take long for my friend, and consequently for us, to power through Halo’s main campaign. I loved every second of it; from the moment you awaken as the Master Chief aboard the Pillar of Autumn (alongside his unexplained twin brother if you’re playing in co-op!) through to that last daring 6 minute Warthog escape as the Flood, Covenant and environment do everything they can to stop you reaching your Pelican in time.

Once we finished the campaign we moved on to hone our skills against each other in competitive multiplayer. Playing Rockets on Hang ‘Em’ High was a favourite, as well as our own made up Jeep Jousting contest on Blood Gulch. Days were spent exploring every inch or every level, mastering the trajectory of rockets, perfecting sniper shots and – sigh – grabbing the Needler when you found yourself short of firepower and in the wrong place at the wrong time.

I remember, shortly after this, nagging my parents for an Xbox for Christmas. It was an expensive request, and I was willing to give up as many future Birthday and Christmas presents as needed to try and help it happen. Thanks to Halo, the Xbox truly felt like something special – a “true generational leap” as it would now be called. Before then my Dad had owned a Nintendo 64 and a PlayStation, but the Xbox was on another level. It felt game changing – literally.

Fast forward to Christmas Eve and I had a sleepless night of excitement, anticipation and dread. Christmas morning (finally) arrived and – of course – I opened my presents: my very own Xbox and my very own copy of Halo. It was magical.

Now that I am older – but sadly not wiser – I can recognise that this was the moment that my hobby and passion for video games started. The adventures of Mario and Link on the Nintendo 64 will always have a special place in my heart and, likewise, I will always fondly remember trying to fumble my way through the original Tomb Raider and Crash Bandicoot games (eventually relying on cheat to get through – naturally!). But it was Halo and the Xbox that blew my mind and begun a hobby that has given me much joy whilst simultaneously crippling my bank balance.

Halo: Combat Evolved didn’t end with the OG Xbox, however. It made its way to PC, was remastered for Xbox 360, and now sits proudly on current generation Xbox hardware (Xbox One / Xbox One S / Xbox One X) as part of the Master Chief Collection. It’s had its graphics updated, and various other nips and tucks, but the original experience is always just a toggle away. And with it being available on current Xbox hardware that means it will continue to be available on Xbox Series X when it launches later this year, 19 years after the OG Xbox and Halo entered my life.

That life is different now, however. I am married, have a young daughter, have a dog, have a career, have health issues and all the other myriad things life throws at adults. My gaming hobby has had to adapt as my life has changed and these days shorter gaming sessions that are easy to pick and play are much more important to me (thank you Nintendo for the Switch!).

With this in mind – and with the rise of Netflix and other streaming platforms – I recently turned my attention to cloud gaming. I read about Google Stadia and it’s difficult launch, and I read about Nvidia’s GeForce Now platform which sounded good until publishers started pulling their games off the service every other day. Then I read about Microsoft’s Project xCloud.

It was the latter that really interested me though. Having the ability to stream from my console to my phone is great if the TV is in use, but chances are if I have time to get that up and running, I’ll probably just play something on TV. However, being able to wake up on a weekend, stay in bed, and play a game on my phone from the cloud? That sounds incredibly handy for when my Switch is just out of reach.

So, I decided to give it a go and stream games from Microsoft’s cloud to my Samsung Galaxy S9. All I needed was to download the Xbox Game Streaming App (Preview) for free from Google Play, log into my Xbox account and bluetooth connect my Xbox One controller to my phone. Simple. The clip that attaches to my controller and holds my phone was an optional purchase – but one I would thoroughly recommend considering it was only a £9 investment.

Having read about Nvidia’s GeForce Now and Google Stadia I really wasn’t expecting much. I thought Microsoft would have a handful of relatively simple indie games available and that the quality would be poor. To my surprise, however, there were a lot of titles available to stream and one in particular caught my eye… Halo: The Master Chief Collection.

I clicked the tile and the stream started to load. It took an age to get to the Master Chief Collection’s main menu – this is no exaggeration either as I gave up twice, and on the third attempt just left my phone running and came back some 10 minutes or so later. I wasn’t very optimistic.

Once I was in the main menu, however, things were working. I could pick which Halo game I wanted, tweak the settings and get stuck in. Naturally I opted for Halo: Combat Evolved with the original graphics. Then suddenly there I was: in that grey cargo hold aboard the Pillar of Autumn choosing whether my controls should be inverted or not (obviously not, you animals!).

This is the future that, almost 19 years ago, Halo: Combat Evolved was teasing. And it’s not one I could have predicted. Gone are the wire, the bulky VCR-style hardware boxes, and the huge CRT TV’s. Instead all I needed was a 5.8 inch phone screen and a bluetooth controller.

And the real surprise? It worked. It worked really, really well. I became instantly absorbed, muscle memory kicking in as I weaved my war around the corridors of the Pillar of Autumn collecting weapons, grenades and dispatching Grunts and Elites like it was 2001. There was some occasional controller lag, screen tear, and the odd wireless connection strain, but they were so infrequent I barely noticed. It was Halo: Combat Evolved, as good as it has ever been, but now on my phone in bed.

That got me thinking. Almost 19 years after I first felt it, I was again realising that the goal posts had moved and that I was staring at a new and exciting future for video games. And it was Halo: Combat Evolved that was once again my companion for that journey. Project xCloud has some great games available to stream. I could have picked anything. But it was the Master Chief Collection – and within that the original Halo: Combat Evolved game – that caught my eye.

It must have been Destiny. Oh wait, that’s a different Bungie game…