E3 is now well and truly over and all of the awesome video game journalists who went over to LA to cover the conference have returned and shared all of their glamorous discoveries. Thanks guys and girls! That’s just as well because sadly I’m not someone who can just hop on a plane to the US of A for a video game conference;  I’m just a lowly writer who does this as a hobby after all. Like everyone else I need to get my E3 news from somewhere! I thought this year, though, that instead of boring you with tens of posts and thousands of words during E3 week, I’d wait, watch all of the conferences, and then summarise my thoughts once all the dust had settled after the event. If, however, you do want to read the news from E3 in depth then I’d recommend popping over to Eurogamer, who are an excellent source of E3 (and video game in general) news. You might also want to check out the YouTube channels for Outside Xbox and PlayStation Access, particularly if you’re looking for platform specific E3 coverage.

It may sound obvious, but it was the games that made this year’s E3 so exciting. There were a whole host of great reveals and announcements made during E3 2015 that included Star Wars Battlefront (which was probably my highlight of the whole week) Uncharted 4: A Thief’s End, Rise of the Tomb Raider, Rainbow Six Siege, Ghost Recon: Wildlands, Tom Clancy’s The Division, Assassin’s Creed Syndicate, No Man’s Sky, Mirror’s Edge Catalyst, Deus Ex: Mankind Divided, Just Cause 3, Fallout 4, and more. It’s worth checking out all of the trailers for these games, and the many more announced at E3 2015, and the YouTube links mentioned will contain most of them.

First up for a more detailed dissection then is Microsoft. During the Xbox One conference Microsoft showed off some new gameplay from Halo 5’s single player which, whilst introducing a new mechanic based around giving your teammates order, is unfortunately beginning to look more and more like Call of Duty in space. Still with Nathan Fillion onboard, it’ll be worth checking out, and Halo is destined to be a big hit on launch regardless of whether it truly revolutionises the franchise or not. Microsoft also revealed that Gears of War is being remastered for the Xbox One ahead of the launch of a brand new entry in the franchise, Gears of War 4. Neither Halo or Gears look to be straying too far from their tried and tested formulas mind you, which should please Xbox owners looking forward to the return of this platforms major excluive titles. Microsoft also showed a lot of love for Fallout 4 at E3 explaining how Bethesda’s upcoming post-nuclear war RPG is going to be getting PC-like mod support on Xbox One (and possibly PlayStation 4) in the future. Otherwise there wasn’t too much new and exciting in regards to Fallout 4, as the game already had a lot of pre-E3 coverage. Microsoft did, however, deliver one of the biggest surprises of the event when they announced that backwards compatibility was being introduced to the Xbox One for everyone from Christmas 2015. That’s right, by the end of this year you’ll be able to play 100 of your favourite Xbox 360 games on your Xbox One absolutely free (so take that Sony!) All you will need to do is pop in your existing Xbox 360 disc, or sign in to your existing Xbox account (which you will be signed into anyway if you now own an Xbox One presumably), and then you’ll be able to play away via a digital download of your Xbox 360 game. Microsoft are currently taking votes on the games that will be included at launch, but more are set to be added throughout 2016 and beyond. With Xbox 360 games coming to Xbox One soon then it’s a good job that just before E3 a 1TB Xbox One was also announced. Microsoft’s other big talking point at E3 was their HoloLens virtual reality headset. Whilst the demo video looked impressive enough, it’s hard to believe that what was shown was even close to an actual representation of the finished headset and its capabilities. It all felt a bit optimistic and reminiscent of the unrealistic unveiling of Project Milo. Speaking of unrealistic, Microsoft’s pro-controller just seemed a bit bizarre and it’s hard to see even the niche market it’s aimed at spending over $100 on a gamepad for their $300 console. Maybe it will appeal to those PC gamers who like to use controllers instead though? 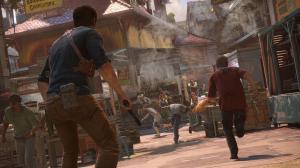 Highlights from E3 for the PlayStation 4 included a much more detailed look at the impossibly vast space exploration game No Man’s Sky, which unfortunately still doesn’t have a firm release date, and the revelation that Guerrilla Games have moved on from their Killzone franchise (for now) to work on a new exclusive IP. Horizon Zero Dawn sees Guerrilla Games pitching a post-apocalyptic world in which nature and robotic dinosaurs are at odds with the remnants of humanity who have had to fallback on their hunter-gatherer instincts. It’s an original concept, and the footage shown off at E3 looked great, so this is definitely one for PlayStation owners to watch out for. The Uncharted 4 gameplay shown was exciting and visually impressive too, even if it does look like Nathan Drake will be getting himself into some overly familiar situations. Sony had a few surprising announcements lined up for their E3 conference as well, which included The Last Guardian being shown off again, only this time running on the PlayStation 4, and Square Enix announcing that they’ve finally listened to their fans and are remaking Final Fantasy VII, which will launch initially on the PlayStation 4. Whilst these surprise announcements, alongside the reveal of a crowd-funding project for Shenmue 3 (which is also backed by Sony to some extent), didn’t excite me much, crowds were understandably very excited at the time and the gaming community has been buzzing ever since. Sony didn’t have anything much to say about hardware at this year’s E3 though, and they certainly didn’t have anything as cunning as backwards compatibility up their sleeves. Bookending Microsoft’s own idea, Sony chose to save the announcement that a 1TB hard drive PlayStation 4 is inbound until after E3 meaning that the games were really the key focus for them this year. Perhaps this is owing to the fact that Sony are currently well ahead of Microsoft in this generation’s console war, and only need to focus on retaining their market share with great software instead of growing it with new hardware promises. Sony should be careful though, as Microsoft’s relentless Xbox One improvements could easily see them quickly catch up with Sony’s success as this generation progresses. It was, however, a shame that there wasn’t more of a focus on Sony’s Project Morpheus during their full conference, with their upcoming virtual reality headset relegated to the show floor.

Nintendo didn’t talk about many games that excited me at this year’s E3, but the return of Star Fox in Star Fox Zero was nice to see, whilst Super Mario Maker continues to look like a genius idea both on paper and in practice. There were plenty of returning franchises for Nintendo announced too, including Zelda and Metroid, but it’s worth noting that these games are coming out on the 3DS (and 2DS) not the Wii U. The lack of major announcements by Nintendo, however, is likely to be because they’re busy working behind closed doors on new hardware. There was no official word about a new handheld or home console at E3, but it was suggested that announcements will be made at some point during 2016, and post-conference rumours have suggested Nintendo were pitching to third party game developers during this year’s E3. Nintendo did have one of the most interesting conferences during E3 though, despite a lack of notable hardware announcements or exciting software reveals. Nintendo kicked off their conference with a weird Muppets inspired video, and whilst this was initially confusing and bizarre, they later redeemed themselves with the Nintendo World Championships 2015. Putting fans on the stage to compete in some of Nintendo’s best-loved IP’s was a masterstroke, focusing on the core fan-centric values that make Nintendo the household name that they are today. Even though Nintendo didn’t have too much to say this year at E3, they still ended up providing hands down one of the best conferences of the week.

All in all then it was an exciting E3 event. There are some great games coming up in the next year or so, and whilst not all of them have me feeling super-excited (I can’t have been the only person suffering Fallout 4 fatigue by the time E3 actually came around!?) there’s no doubt that the next year in gaming looks a lot more exciting than the last one has been. The Xbox One and PlayStation 4 are seeing more useful 1TB hardware iterations launch, with generation defining exclusives and third-party games inbound. Both also have their own virtual reality add-ons just around the corner, which should make for an interesting evolutionary step on current generation hardware. Nintendo, on the other hand, are still showing that, even with little to say at the moment and current iterations of their hardware possibly approaching their twighlight moments, they know how to look after their fans.

If E3 is a good indicator of what’s to come in gaming, and in my experience it usually is, then the future looks very bright indeed.