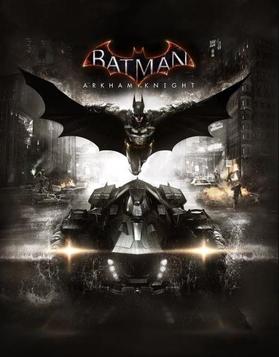 Rocksteady’s third Batman: Arkham game is out at the end of June, but a lot of information about the game has already been released to the general public. For starters we know that Rocksteady are back in the developers chair for this outing, and therefore the game will definitely be better than Warner Bros. Montreal’s poorly made prequel, Batman: Arkham Origins. We also know that the map will be a much larger, open world Gotham, and that Batman will navigate not just by gliding and grappling, but also by using the Batmobile. Oh, and we know that it’s called Batman: Arkham Knight.

We also know that the Joker died at the end of Arkham City, and that Rocksteady have said he’ll stay dead, that Scarecrow is leading several of Batman’s enemies in a bid to defeat the Dark Knight once and for all, and that the game’s set during a dark and rainy Gotham night. Finally, we know that Batman’s not alone in this outing, calling on his partners Nightwing, Robin and Catwoman to aid him in combat during certain mission scenarios. This will undoubtedly add some much needed variety to the Arkham series’ polished, but often copied, fighting mechanics as well as allowing gamers to take control of some of the other key members of the Bat-family, even if it is just for a short while.

Actually, that’s not all we know at all; not by a long way! We know that the Riddler will challenge Batman to race missions through Gotham’s sewers, that the Batmobile comes equipped with a tank mode, that the Bat-tank will use guns and rockets to destroy robot tanks, that there will be a Batgirl prequel story released as downloadable content (DLC) at some point, that Gotham’s citizens are being evacuated because of the threat of a fear-toxin chemical attack by Scarecrow, that Harley Quinn is looking for revenge for Joker’s death, that Batman is probably (definitely) breaking his ‘no killing code’ when electrocuting goons by the face or ramming their cars off the road at 200 mph, and that there is a new character and antagonist for Batman being introduced known as the titular Arkham Knight. The one thing that we don’t actually know about the game, however, is who the Arkham Knight really is.

So, here are my 10 theories, from least likely to most likely, on who’s underneath the Arkham Knight’s cowl… 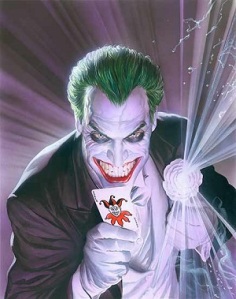 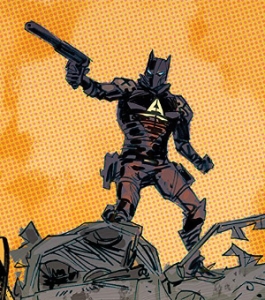 OK, don’t take this one too literally. Whilst I doubt that the Arkham Knight will end up being a disgruntled Wayne Enterprises employee, fed up with failing to balance the books thanks to a Batcave shaped hole in the P&L, Rocksteady have claimed that the Arkham Knight is a brand new character. Now this description may not hold true for the person beneath the mask, but it could just turn out to be the case. It would be a disappointment, as fans are expecting an existing character with an established history to end up being the Arkham Knight, but you never know; it could just be Dave. 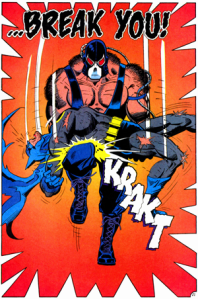 Bane has been a key villain in the former Arkham games, and in Batman’s personal history in this universe, with the games repeatedly hinting towards the Knightfall comic book arc. Yet he’s been strangely absent from the trailers for Arkham Knight. It could be that the Arkham Knight and Bane are one and the same, but it seems unlikely that Bane would give up his bulging muscles and venom to combat Batman in this way. It’s much more likely that Bane will be involved in backing the Arkham Knight, providing him with the tech and manpower needed to attack Gotham and break the Bat once and for all. 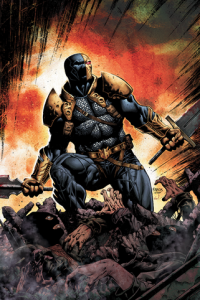 This also seems quite far-fetched, but there are similarities between Slade Wilson’s Deathstroke and the Arkham Knight. Both have heavy armour, both are skilled in hand-to-hand and weapons-based combat, and both are militaristic bad-asses. Could it be that Deathstroke has been hired by someone else on this list to take down Batman with the aid of their army? Thanks to Arkham Origins Batman and Deathstroke definitely have an established history in the Arkham universe, but it doesn’t really fit Deathstroke’s style to hide behind a second identity. Still, it’s not beyond the realms of possibility that the Arkham Knight will take off his cowl to reveal a familiar grey and orange mask lurking underneath. 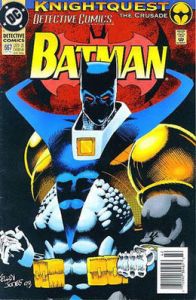 In Arkham City Azrael warned Batman that dark days were ahead, and that Batman would need to save Gotham. Azrael, a knight himself, seemed a likely candidate for the Arkham Knight’s real identity until trailers showed him returning to the series in his more traditional armour, informing Batman that his earlier prophecy was now coming true. Still, it’s possible, although unlikely, that Azrael will end up being a dual-Knight, both warning Batman about the prophecy and becoming the Arkham Knight to ensure it ends up being fulfilled. 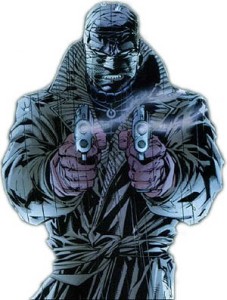 Thomas Elliot made a brief appearance in Arkham City revealing to Batman that he had changed his face to match that of Bruce Wayne’s. Elliot promised to return, and perhaps he has as the Arkham Knight. Elliot hates Bruce Wayne, and it’s possible that he’s managed to learn Batman’s true identity since Arkham City. With the Elliot family fortune paying for intensive training, tech, and an army of mercenaries, Elliot could be back not as Hush but as the Arkham Knight. If he’s fixed his facial scarring (perhaps with some Lazarus Pit or magical help) Elliot could stand to gain a lot by destroying Batman, Wayne Enterprises and Gotham, only to turn on his criminal allies and takeover Bruce Wayne’s world in a new Gotham under his rule. 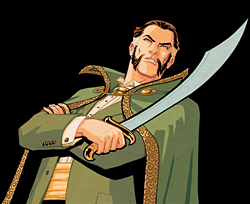 Despite their apparent demises at the end of Arkham City, the al Ghul’s could easily be heavily involved with the Arkham Knight thanks to a Lazarus Pit or two. The regenerative effects could have restored Ra’s’ youth allowing him to pervert Batman’s ideals to take the Dark Knight down and finally control Gotham as the Arkham Knight. With the League of Assassins supporting him, Ra’s would have access to the resources necessary to create an army to invade Gotham. And whilst the Arkham Knight definitely appears to be male, don’t be surprised if Talia turns out to be pulling the strings behind the scenes, especially with the entries at number 2 and number 1 on this list. 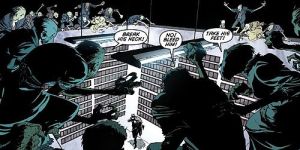 Recently established in the New 52 comics, The Court of Owls is a secret society that has been in control of Gotham for hundreds of years. Could the Court finally be fed up with Batman interfering in their plans, which might have included the creation of Arkham City? Sure, it’d take some clever writing to make all of the previous Arkham games fit within a Court of Owls centric plot, but it’s definitely possible. In fact it could be that The Court are at the heart of Azrael’s prophecy and that the Arkham Knight is just a new name for their lethal assassin; Talon. Why rename Talon as the Arkham Knight? Perhaps to throw Batman of the Court’s trail, or perhaps to taunt Batman and teach him that is interfering in Arkham City is the reason the Court has finally decided to reveal its presence.

The son of Bruce Wayne and Talia al Ghul is portrayed in the New 52 comics as a young boy, but it’s known that Talia can create accelerated growth clones of the young Robin. Could the Arkham Knight be an older Damian? He would certainly have the means to study Batman, the extensive combat knowledge, and the brutal attitude necessary to be the Arkham Knight. Once again Damian would have the power of the League of Assassins behind him to ensure a successful invasion of Gotham. This makes the introduction of Damian Wayne as the Arkham Knight a real possibility, with Damian perhaps even avenging the death of his mother and grandfather in Arkham City. 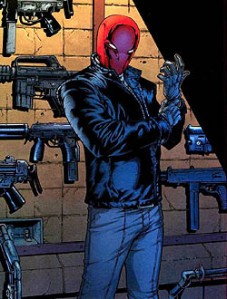 This is where I’d put my money. Todd hasn’t cropped up a lot in the Arkham games yet, but we know that he died at the hands of the Joker in this universe too. With Dick Grayson’s Nightwing and Tim Drake’s Robin involved in the dual-play mechanic, Jason Todd is notably absent. The Arkham Knight is the antithetical militant Batman and Todd would fit this role perfectly. Angry at Batman for letting him die, for failing to clean up Gotham, and for robbing him of his revenge against the Joker, Todd ticks all the right boxes. He would have an in-depth knowledge of Batman’s abilities, actions, friends and enemies and know how to use this to his advantage. Assuming his revival at the hands of Talia or Ra’s al Ghul, Jason would even have access to the League of Assassins’ contacts and wealth to create his own private army to take Gotham by storm. Interestingly, Red Hood has his own slice of DLC, but this could easily focus on Jason’s pre-Arkham Knight journey, his newfound mission in life after his Arkham Knight days come to an end, or even his attempt to deceive Batman and his allies by living a dual-life both as Red Hood and as the Arkham Knight.

At the moment no one knows for sure who the Arkham Knight is, and it could be that he ends up being someone who I’ve completely missed from the list above. Or he might just be Dave from accounts. One thing is for certain though, and that’s that we’ll all get to find out for ourselves on 23rd June 2015, when Batman: Arkham Knight launches on PC, PlayStation 4 and Xbox One in the UK.