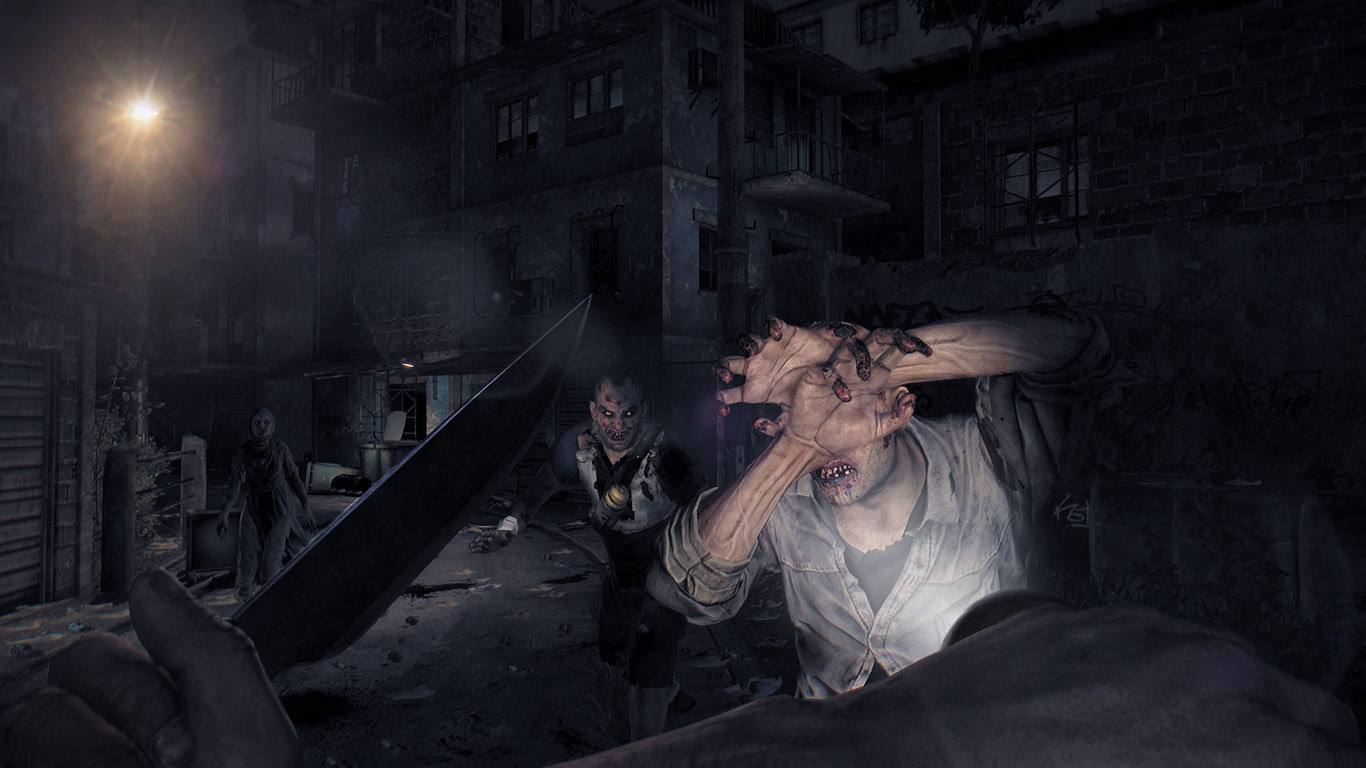 Available on: PC, PlayStation 4 & Xbox One.

The road to actually getting my hands on a physical copy of Dying Light has been a long one. Since Techland’s latest zombie survival game was announced back in 2013 it has been delayed, the PlayStation 3 and Xbox 360 versions have been abandoned, and most recently the release of physical copies of the game was postponed by a month in the UK and Europe. The digital version of Dying Light still came out on Steam, the PlayStation Store, and Xbox Live at the end of January 2015, but boxed copies arrived a month later on 27th February.

The spiritual successor to Techland’s Dead Island (as opposed to the actual sequel, which is being developed by Yager Development), I could have bought Dying Light a month ago as a digital download if it hadn’t been for one issue: the price. At £54.99 on the PlayStation Store, with the season pass costing an additional £15.99, it made sense to wait for Amazon’s ‘Be the Zombie’ boxed game and season pass bundle, which only cost £44.99 all in! That’s a massive saving of over £25 for the game, the pre-order game mode (more on that later), and the season pass, with the added benefit of a boxed copy having some pre-owned value. Luckily, after spending several hours with Dying Light, I’m happy to report that I’m not planning on trading it in anytime soon.

Playing as operative Kyle Crane, Dying Light sees you airdropped into the quarantined, fictional city of Harran, which is overrun by the walking dead. Your mission, on behalf of the shady and morally bankrupt Global Relief Effort, is to track down an important document that has gotten into the hands of political figure turned rogue maniac, Rais. Harran’s slums, and later its old town areas, are sprawling with zombies and the infection suppressing drug, Antizen, is in short supply. Unfortunately on arrival you find yourself attacked by Rais’ bandits, bitten by a zombie, and then rescued by a crew from the Tower. The guys and girls of the Tower give you some Antizen in order to hold off the infection, and in return you start helping them out, with the ultimate goal of orchestrating a meeting with Rais’ rival gang to get to the file.

Many of Dying Light’s mechanics will feel instantly familiar to anyone who spent time playing Techland’s Dead Island. It’s a case of evolution over revolution for Techland, with Dying Light’s free-running parkour mechanics also heavily reminiscent of another game; DICE’s Mirror’s Edge. Moving around Harran is dangerous at street level, so the game encourages you to race across the rooftops, leap over ledges, and climb upwards in order to travel around.

Should you find yourself at street level among the undead though, you’re able to fight them off using a range of melee weapons, guns (which you get later on), items (Molotov’s, throwing stars, and more) and a handy Dead Island-esque kick. Melee weapons weaken and break with use and the more head bashing you do, the more stamina you use up, until you run out of puff and can’t do much more than just keep the zombies at bay. It’s exactly the same stamina mechanic as Dead Island in this regard, except your stamina isn’t drained as quickly and it’s only linked to melee weapon attacks, not running, jumping and kicking. You can’t sprint forever mind you, but you can still sprint out of trouble when you’re out of attack stamina. You can kick as much as you want though, which provides a handy way of injuring zombies should you find yourself in trouble without a weapon or without stamina. Whether you go for the passive free-running option, or the aggressive skull-cracking route, you’re in for a lot of fun with Dying Light.

The character progression system in Dying Light will also be instantly familiar to fans of Techland’s previous games. Crane earns points and levels-up in three key areas. Survivor points are earned by completing missions, collecting airdrops and finishing other game world tasks, and give players access to perks such as increased backpack capacity and new weapon types. Agility points improve Crane’s movement, such as by reducing fall damage or adding in extra moves such as the always-fun dropkick, and this type of XP is picked up by navigating the map using parkour. Finally, power points improve Crane’s weapon abilities by adding skills like power attacks and stuns, and these are earned by fighting. Dying Light works best when you try and level each area evenly, and there are plenty of tactical choices to make when picking perks and skills to suit your own play style. Weapons are also customisable and adaptable too, so there’s plenty of depth in Dying Light’s structure, and you can even make your own Lucille if you want to (I did!).

The themes and mechanics in Dying Light are all quite familiar then, and there’s no denying that this game is not a huge departure for Techland from their former Dead Island series. Despite this, Dying Light is consistently enjoyable to play. Zombie games are a dime-a-dozen at the moment, so it speaks volumes for Dying Light that it can continue to impress, entertain and deliver such a satisfying game in such an over-saturated market. The movement in Dying Light is very fluid and the mechanics that have been imported from Dead Island, such as the stamina bar, are done so in a way that no longer makes them feel like annoying drawbacks, but tactically refined gameplay elements instead. Dying Light also has one key new gameplay element that helps to keep it from just being a better playing, better looking version of Dead Island; night-time.

When the in-game clock ticks past 9pm, the night descends and things get a lot more serious. At night-time, the shuffling and slow zombies, special infected types (spitters, exploders, etc.), and volatiles of the day are joined by aggressive hunter zombies. These zombies are quick, agile and very tough. UV light can weaken or stun them in the short-term, but your best bet is to outrun them and get to a safe house, quick. Even when playing the game in co-op, which is offered throughout the whole game for up to 4 players online, these hunters are a challenge if you haven’t got your hands on some serious weapons and firepower. To reward this increased challenge, points are doubled at night-time with extra XP awarded for surviving the night, which is a lot shorter in gameplay time than the day is.

You’re never forced to play at night though, with safe houses allowing you to sleep through the night to get back to the daytime if that’s what you want (or visa versa). Of course you can always try sneaking around at night-time using the aura sense mechanic, an obligatory feature that every game feels compelled to include these days, to locate hunters near you; an orange glow highlights any hunters on the other side of walls or other objects that are blocking your line of vision. Even then, though, you’ll be lucky to make it from one safe house to the next without incident, especially in the early portions of the game. Night-time is tense and exciting (and genuinely a little bit scary at first), combining the aforementioned Dead Island and Mirror’s Edge mechanics with something similar to Alien: Isolation’s panic-inducing horror. Only unlike in Alien: Isolation, Dying Light’s hunter could be another gamer, thanks to the ‘Be the Zombie’ mode.

The ‘Be the Zombie’ online mode allows gamers to play as the night-hunter zombie, invading other gamer’s worlds for an asymmetrical head-to-head multiplayer experience. There’s a separate skill tree for your hunter-zombie too, adding another element to Dying Light’s appeal and replayability. Again, playing as the zombie and hunting other gamers isn’t a particular new idea, but it’s done very well in Dying Light, with a depth that makes this mode worth playing. It’s also morbidly satisfying when you get your target as the night-hunter.

Dying Light is a good looking game. Dynamic weather, excellent lighting effects during the day and night, and brutal attack animations combine to make a visually pleasing next-gen title. There are some pop-in issues, but nothing so major or noticeable that it detracts from the overall experience. Frame-rate issues (on the PlayStation 4 at least) are relatively isolated too, occurring only in certain instances, the most notable of which is when you get high up in the map and lots of sky is visible. I don’t know what causes this, but it is very noticeable during an early rooftop training section, as the game chugs and judders. It seems highly likely that these relatively isolated instances could be easily fixed in a patch in the future though, which would make Dying Light an almost flawlessly smooth experience. As it is, these frame-rate hiccups are so uncommon that they don’t really impact the gameplay enough to detract from Dying Light’s excellent presentation.

Dying Light is not without criticism, but yet it feels difficult to do so. At worst Dying Light is derivative of other games, with it’s familiar Dead Island mechanics, Mirror’s Edge style parkour, standard lock-picking and aura mechanics, and Left 4 Dead zombie types. Yet it combines these elements so well within its open world, that this derivative nature just doesn’t feel like much of a problem; in fact it just feels like this is the Techland zombie game that everyone has been waiting for since Dead Island was first announced way back when. Perhaps the biggest drawback is Dying Light’s somewhat predictable plot and occasionally less-than-stellar character study (if you can’t read between the lines, I’m saying that Crane seems like a right douchebag at times, particularly early on).

If you go into Dying Light expecting a zombie-parkour game then you’ll struggle to be disappointed. It looks great, plays almost flawlessly, and it is a lot of fun. In fact Dying Light delivers on exactly what Techland promised; a refined, blockbuster version of the cult hit Dead Island with new mechanics and ideas thrown in.

In summary: Dying Light was worth the wait.