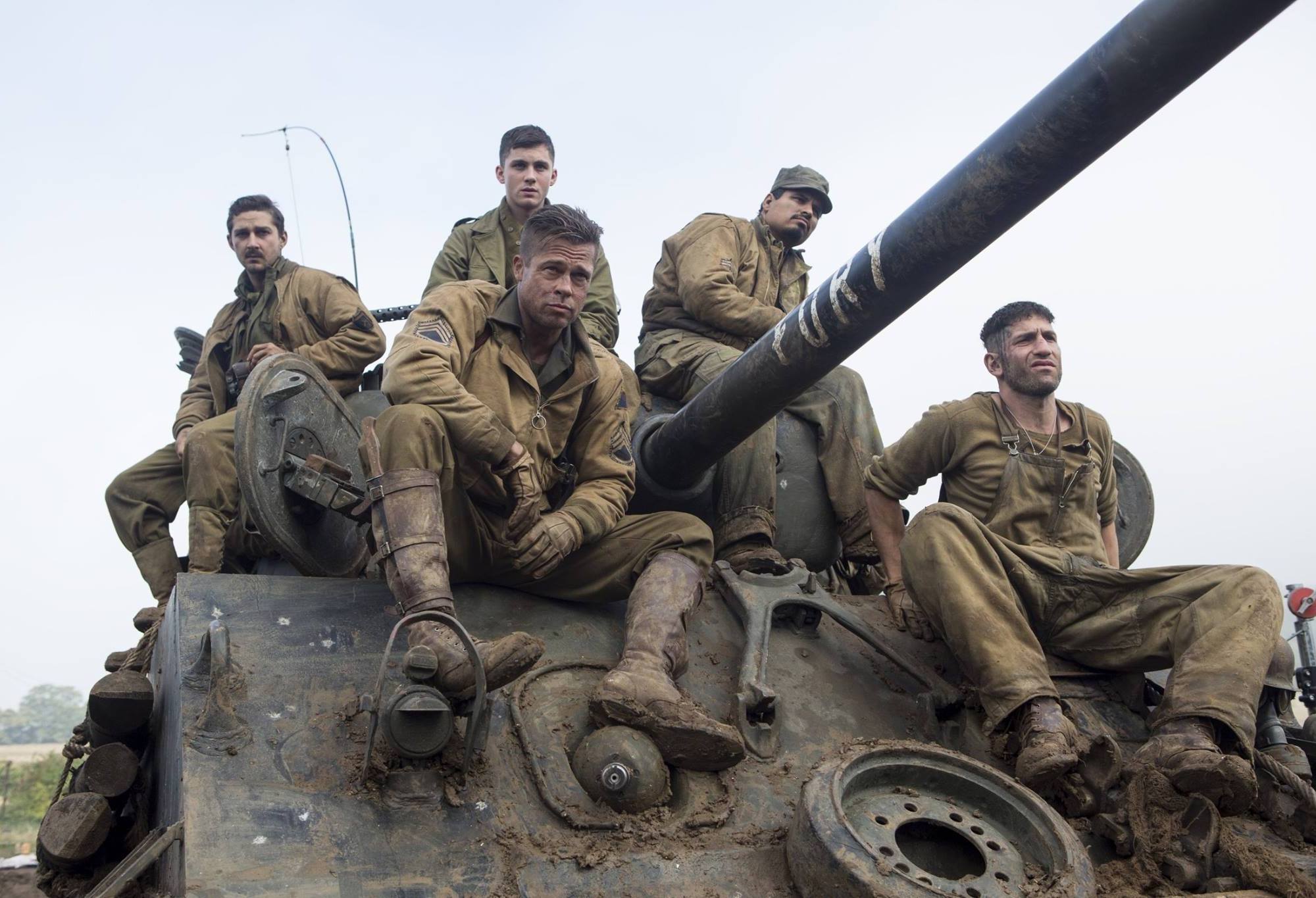 These four men have fought in Africa, France, and Belgium, and are now looking to continue their survival into German enemy territory as well. After an unseen, but undeniably brutal, battle at the beginning of the film, these four men have lost one of their crew and are lumbered with an inexperienced young soldier joining them called Norman “Machine” Ellison (Logan Lerman). With no actual tank or war experience to draw upon (and with him yet to earn his “Machine” nickname), the crew of the tank called Fury struggle to make Norman understand the brutality of the war they are fighting, particularly as they face-off against fanatical Nazi troops in their homeland, such as Hitler’s dedicated SS brigades.

Brutal is perhaps the best word to describe Fury. You should watch this film under absolutely no false pretenses. Fury portrays war for what it is; a gruelling, lethal, nonsensical battle in which the only way of life is by following the motto “kill or be killed” to the letter. When Saving Private Ryan first came out, audiences were surprised by the realistic violence portrayed on screen. Well, compared to Fury, Saving Private Ryan was most definitely reserved. Fury has no problem showing you what happens to a man who burns alive inside a tank, or what happens to a Nazi soldier who can’t get out of the way of a speeding Sherman in time.

Yet for all the gore, Fury doesn’t overdo it. Had this been a fantasy war film then I may have argued that this was too much. But the truth that Fury so masterfully portrays is that World War II was absolute Hell. Real people actually went through this not that long ago, and it’s impossible not to come away from Fury feeling humbled once more by the sacrifice that so few (but still too many) made so that you and I could live as free people today.

Fury focuses its storytelling elements firmly on the five tank crew members, and specifically on Norman, who quickly learns how fast the shit can hit the fan in Nazi Germany. Other characters are introduced fleetingly, perhaps because the relationships of these five men are more important to the film, or perhaps because in war, you may only meet a person once before they die in front of you. The character study in Fury is masterful, with all five tank crew members being given near-equal time to develop, grow and shine. It’s Brad Pitt and Logan Lerman that ultimately steal the show, but only just. I found Jon Bernthal to be particularly interesting. He’s clearly a simpler-minded soldier here, but there is so much more depth to him than meets the eye, and it’s only in the final third of Fury that the softer side of a man fearing death really shines through. Even Shia LaBeouf, whose name appearing in a film’s cast usually puts me off it straight away, was nothing short of exceptional.

These characters would be nothing without the relationships between them that are explored throughout Fury’s long, but never over-long, 134 minute run time. It’s clear throughout Fury that the definition of a good or bad man doesn’t exist in war time. These soldiers are men doing what they feel they have to do in order to survive another day and win the war. All five characters undergo a transformation during the film, and whilst the camaraderie of soldiers at war shines through at times, the tensions of five men forced to live and kill together inside a small metal death trap is palpable throughout. One scene in a German household even rivals the opening to Inglourious Basterds for off-the-chart tension.

The cinematography and use of sound and music is excellent throughout too. Fury shows war for what it is and the scenes inside the tank made me feel claustrophobic and vulnerable. Tanks may have offered protection against machine gun fire, but against a rocket or enemy tank, there was no escape or hiding; you either won the fight, or you paid the ultimate price for failure. Fury, whilst not based directly on a true story, is also for the most part historically accurate with genuine World War II uniforms, equipment and tanks used during filming.

Towards the end, some Hollywood elements inevitably sneak their way into Fury’s otherwise polished and realistically gritty portrayal. A clichéd moment of bravado, and a final battle that stretches the realism just a little bit thin, are the only blemishes on this otherwise gripping film. They’re not enough to ruin it though, and the action-packed final third won’t upset those looking for a meaningful film, but should please those looking for some epic World War II battles. In fact, just as Steven Spielberg did with Saving Private Ryan, Ayer manages to keep the Hollywood action just on the right side of believable, perfectly capturing the historical ideal that World War II was defined by brave individuals conducting incredible acts of bravery against unbelievable odds. Concluding the film with a plot-element borrowed from Saving Private Ryan is also perhaps a little obvious, but for a film that uses the line “Fuck you Nazis!” more often than the last Wolfenstein video game, it’s nice to see the direction showing that there were good and bad men, who made good and bad choices each day, on both sides of the battlefield in World War II.

I can’t finish this review by saying that Fury is fantastic, or great, or any of those sort of superlatives. It is, but to use those words would undersell the message that Fury delivers about war; that it’s truly terrible. With that said then, Fury is the Saving Private Ryan of a new generation; it’s not pleasurable viewing, but it is essential.